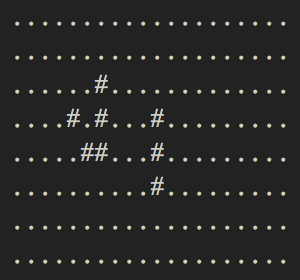 Just a quick post today, I had some time free this weekend and figured I'd take a crack at an old classic: "Conway's Game of Life".

This is an interesting puzzle because it centers around context-based computations, each cell determines whether it lives or dies in the next generation based on its nearby neighbours. This is typically considered one of the trickier things to do in a functional language and solutions often end up being a bit clunky at best. I think clunkiness usually results when attempting to port a solution from an imperative language over to a functional language. To do so you need to figure out some way to iterate over your grid in 2 dimensions at once doing complicated indexing to compute your neighbours and attempting to store your results somewhere as you go. It definitely can be done, you can fake loops using folds and traversable, but I feel like there are better approaches. Allow me to present my take on it.

We'll be using some pretty standard language extensions, and we'll be using Representable and Comonads, so let's import a few things to get started:

Conway's game of life runs on a grid, so we'll need to think up some way to represent that. We'll need to be able to index into that grid and be able to compute neighbours of a given location, so we can let that guide our representation.

I've often seen people try to represent grids in Haskell as List Zippers generalized to higher dimensions, i.e. if we have a structure like data Zipper a = Zipper [a] a [a], you might try representing a grid as Zipper (Zipper a).

While this is a totally valid representation, indexing into it and defining comonad's extend becomes prohibitively difficult to reason about. I propose we try something a little different by extracting the 'index' from the data structure and holding them together side by side. We'll represent our grid as a Vector of Vectors just as you'd expect, but then we'll pair that with a set of (x, y) coordinates and set up some indexing logic to take care of our Comonad instance for us!

If your Category Theory senses are tingling you may recognize this as the Store Comonad. Store is typically represented as a tuple of (s -> a, s). This means that you have some index type s and you know how to look up an a from it. We can model our grid as (Vector (Vector a), (Int, Int)) then our s -> a is simply a partially applied Vector lookup! I tried setting this up, but the default Store comonad does no optimization or memoization over the underling function so for each progressive step in Conway's game of life it had to compute all previous steps again! That's clearly pretty inefficient, we can do better!

Enter Control.Comonad.Representable.Store! As we just noticed, a Store is just an indexing function alongside an index, since Representable Functors are indexable by nature, they make a great companion for the Store comonad. Now instead of partially applying our index function we can actually just keep the Representable functor around and do operations over that, so the Store is going to look something like this: (Vector (Vector a), (Int, Int)).

Unfortunately there isn't a Representable instance defined for Vectors (since they can vary in size), so we'll need to take care of that first. For simplicity we'll deal with a fixed grid-size of 20x20, meaning we can enforce that each vector is of exactly length 20 which lets us write a representable instance for it!. We'll wrap the Vectors in a VBounded newtype to keep things straight:

There's the heavy lifting done! Notice that in the Representable instance for VBounded we're doing pac-man 'wrap-around' logic by taking the modulus of indices by grid size before indexing.

Now let's wrap it up in a Store, we're using store provided by Control.ComonadRepresentable.Store takes a tabulation function and a starting index and builds up a representable instace for us. For our starting position we'll take a list of coordinates which are 'alive'. That means that our tabulation function can just compute whether the index it's passed is part of the 'living' list!

Now for the meat and potatoes, we need to compute the successive iterations of the grid over time. We may want to switch the set of life rules later, so let's make it generic. We need to know the neighbours of each cell in order to know how it will change, which means we need to somehow get each cell, find its neighbours, compute its liveness, then slot that into the grid as the next iteration. That sounds like a lot of work! If we think about it though, contextual computations are a comonad's specialty! Our Representable Store is a comonad, which means it implements extend :: (Grid a -> b) -> Grid a -> Grid b. Each Grid passed to the function is focused on one of the slots in the grid, and whatever the function returns will be put into that slot! This makes it pretty easy to write our rule!

Two things here, we've defined step = extend which we can partially apply with a rule for our game, turning it into just Grid Bool -> Grid Bool which is perfect for iterating through cycles! The other interesting thing is the use of experiment which is provided by the ComonadStore typeclass. Here's the generalized signature alongside our specialized version:

Experiment uses a function which turns an index into a functor of indexes, then runs it on the index in a store and extracts a value for each index using fmap to replace each index with its value from the store! A bit confusing perhaps, but it fits our use case perfectly!

Now we need a way to render our board to text!

First we're unpacking the underlying VBounded (VBounded a), then we convert each bool to a representative string, fold those strings into lines, then fold those lines into a single string by packing newlines in between.

We cleverly defined mkGrid earlier to take a list of coords which were alive to define a board; if we make up some interesting combinators we can make a little DSL for setting up a starting grid!

That's pretty slick if you ask me!

It's not terribly important, but here's the actual game loop if you're interested:

That's about it, hope you found something interesting!