Optics + Regex: Greater than the sum of their parts 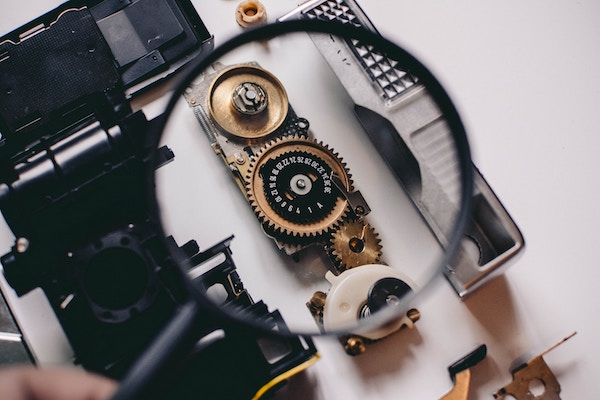 The library presented in this post is one of many steps towards getting everyone interested in the amazing world of Optics! If you're at all interested in learning their ins & outs; check out the comprehensive book I'm writing on the topic: Optics By Example

Regardless of the programming language, regular expressions have always been a core tool in the programmer's toolbox. Though some have a distaste for their difficult to maintain nature, they're an adaptable quick'n'dirty way to get things done.

As much love as I have for Regular Expressions, they've become an incredibly hacky thing; they support a lot of options and a lot of different behaviours, so the interfaces to regular expressions in all languages tends to leave a bit to be desired.

I don't know about you, but I've found almost every regular expression interface I've ever used in any language to be a bit clunky and inelegant; that's not meant to insult or demean any of those libraries, I think it's because regular expressions have a complex set of possible operations and the combination of them makes it tough to design a clean interface. Here are just a few reasons why it's hard to design a regex interface:

Luckily Haskell has a few tricks that help make some of these inherently difficult things a bit easier. Inherently lazy data structures and computations allows us to punt off laziness to the language rather than worrying about how to do the minimal amount of work possible. TemplateHaskell allows us to statically check Regular Expressions to ensure they're valid at compile time, and could even possibly allow us to statically analyze the existence of match groups. But that still leaves a lot of surface area to cover! It's easy to see how come these interfaces are complicated!

Think about designing a single interface which can support ALL of the following operations performantly and elegantly:

Yikes... That's going to take either a lot of methods or a lot of options!

In a language like Haskell which doesn't have keyword or optional arguments it means we have to either overload operators with a lot of different meanings based on context; or provide a LOT of functions that the user has to learn, increasing our API's surface area. You may be familiar with the laughably overloaded "do everything" regex operator in many Haskell regex libs:

And even that doesn't handle replacement!

Overloading is one approach, but as it turns out, it requires a lot of spelunking through types and documentation to even find out what the valid possible uses are! I'm going to rule out this approach as unwieldy and tough to reason about. That leaves us with the other option; add a whole bunch of methods or options, which doesn't sound great either, mainly because I don't want someone to need to learn a dozen specialized functions just to use my library. If only there was some existing vocabulary of operations which could be composed in different permutations to express complex ideas!

Think about what regular expressions are meant to do; they're an interface which allows you to get or set zero or more small pieces of text in a larger whole. This is practically the dictionary definition of a Traversal in optics! Interop with optics means you instantly benefit from the plethora of existing optics combinators! In fact, optics fit this problem so nicely that the lensy wrapper I built supports more features, with less code, and runs faster (for replacements) than the regex library it wraps! Stay tuned for more on how that's even possible near the end!

Using optics as an interface has the benefit that the user is either already familiar with most of the combinators and tools they'll need from using optics previously, or that everything they learn here is transferable into work with optics in the future! As more optics are discovered, added, and optimized, the regex library passively benefits without any extra work from anyone!

I don't want to discount the fact that optics can be tough to work with; I'm aware that they have a reputation of being too hard to learn and sometimes have poor type-inference and tricky error messages. I'm doing my best to address those problems through education, and there are new optics libraries coming out every year that improve error messages and usability! Despite current inconveniences, optics are fundamental constructions which model problems well; I believe optics are inevitable! So rather than shying away from an incredibly elegant solution because of a few temporary issues with the domain I'd rather push through them, use all the power the domain provides me, and continue to do all I can to chip away at the usability problems over time.

Okay! I'll put my soapbox away, now it's time to see how this all actually works. Notice how most of the following examples actually read roughly like a sentence!

lens-regex-pcre provides regex, match, group and groups in the following examples, everything else is regular ol' optics from the lens library!

We'll search through this text in the following examples:

First off, let's check if a pattern exists in the text:

regex is a QuasiQuoter which constructs a traversal over all the text that matches the pattern you pass to it; behind the scenes it compiles the regex with pcre-heavy and will check your regex for you at compile time! Look; if we give it a bad pattern we find out right away!

Okay! Moving on, what if we just want to find the first match? We can use firstOf from lens to get Just the first focus or Nothing.

Here we use a fun regex to return the first word with doubles of a letter inside; it turns out kittens has a double t!

We use match to say we want to extract the text that was matched.

Next we want to get ALL the matches for a pattern, this one is probably the most common task we want to perform, luckily it's common when working with optics too!

Let's find all the words starting with r using toListOf

What if we want to count the number of matches instead?

But that's not all! We can edit and mutate our matches in-place! This is something that the lensy interface does much better than any regex library I've ever seen. Hold my beer.

We can do the boring basic regex replace without even breaking a sweat:

Now for the fun stuff; we can mutate a match in-place!

Let's reverse all of our matches:

Want to replace matches using a list of substitutions? No problem! We can use partsOf to edit our matches as a list!

We can even do updates which require effects!

Let's find and replace variables in a block of text with values from environment variables using IO!

Note that %%~ is the combinator for running a traverse over the targets. We could also use traverseOf.

When you think about what we've managed to do with replaceWithEnv in a single line of code I think it's pretty impressive.

And we haven't even looked at groups yet!

Instead of using match after regex we just use groups instead! It's that easy.

Let's say we want to collect only the names of every variable in a template string:

You can substitute/edit groups too!

What if we got all our our area codes and local numbers messed up in our phone numbers? We can fix that in one fell swoop:

So with this new vocabulary how do we solve all the problems we posed earlier?

You can replace the call to taking with a simple Prelude.take 3 on the whole list of matches if you prefer, it'll lazily do the minimum amount of work!

Anyways, at this point I'm rambling, but I hope you see that this is too useful of an abstraction for us to give up!

Huge thanks to everyone who has done work on pcre-light and pcre-heavy; and of course everyone who helped to build lens too! This wouldn't be possible without both of them!

The library has a Text interface which supports Unicode, and a ByteString interface for when you've gotta go fast!

Typically one would expect that the more expressive an interface, the worse it would perform, in this case the opposite is true! lens-regex-pcre utilizes pcre-heavy ONLY for regex compilation and finding match positions with scanRanges, that's it! In fact, I don't use pcre-heavy's built-in support for replacements at all! After finding the match positions it lazily walks over the full ByteString splitting it into chunks. Chunks are tagged with whether they're a match or not, then the "match" chunks are split further to represent whether the text is in a group or not. This allows us to implement all of our regex operations as a simple traversal over a nested list of Eithers. These traversals are the ONLY things we actually need to implement, all other functionality including listing matches, filtering matches, and even setting or updating matches already exists in lens as generic optics combinators!

This means I didn't need to optimize for replacements or for viewing separately, because I didn't optimize for specific actions at all! I just built a single Traversal, and everything else follows from that.

You heard that right! I didn't write ANY special logic for viewing, updating, setting, or anything else! I just provided the appropriate traversals, optics combinators do the rest, and it's still performant!

There was a little bit of fiddly logic involved with splitting the text up into chunks, but after that it all gets pretty easy to reason about. To optimize the Traversal itself I was easily able to refactor things to use ByteString 'Builder's rather than full ByteStrings, which have much better concatenation performance.

With the caveat that I don't claim to be an expert at benchmarks; (please take a look and tell me if I'm making any critical mistakes!) this single change took lens-regex-pcre from being about half the speed of pcre-heavy to being within 0.6% of equal for search, and ~10% faster for replacements. It's just as fast for arbitrary pure or effectful modifications, which is something other regex libraries simply don't support. If there's a need for it, it can also trivially support things like inverting the match to operate over all unmatched text, or things like splitting up a text on matches, etc.

I suspect that these performance improvements are simple enough they could also be back-ported to pcre-heavy if anyone has the desire to do so, I'd be curious if it works just as well for pcre-heavy as it did for lens-regex-pcre.