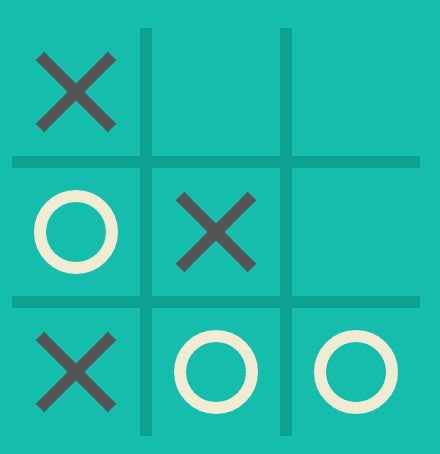 Today we'll be looking at type programming in Haskell. Programming in type-land allows us to teach the compiler a few new tricks and to verify additional constraints at compile-time rather than run-time. The canonical example is that you can encode the length of a list as a type so that you can verify that appending an element to a list of n elements yields a list of n + 1 elements. If you haven't read about or experimented with an example like that before I'd say to check out Matt Parson's post on type programming first. We're going to go a step further and we'll actually encode the rules of a game of Tic Tac Toe into types so that we can statically guarantee that nobody cheats! If you're into spoilers you can see the finished code at the git repo here.

Type programming is a newly popularized idea, so the tools for it are still a bit rough (in Haskell at least), check out Idris if you'd like to see something a bit more polished.

There are some libraries popping up in the Haskell ecosystem which are making the ideas presented here easier to work with, most notably the singletons library which can generate a lot of the type-level primitives we write here. Check it out if you like, but I find it's a bit confusing for people new to this stuff, so I'll be spelling most things out in long-hand.

Here's a representation of the de-facto 3x3 Tic Tac Toe board:

Note that we'll need the {-# language DeriveFunctor #-} pragma for this.

We'll need a way to refer to individual squares in the grid so our player can say where they'd like to move. Let's just use simple (x, y) coordinates. We'll use a custom datatype rather than Int so that we know the coordinates are in bounds.

Here's a quick function which lets us change a slot inside a Triple:

And that gives us everything we need to place pieces on the board:

Looking good! But wait, there's really no validation going on here! Players could play on the same square over and over again! Or maybe player X just keeps on playing without giving O a turn! We could do error handling at runtime inside the function, but that would mean throwing runtime exceptions (Yikes!), running things inside an error monad, or returning an Either. But those are all boring and involve runtime checks so lets see how types can help do this work at compile-time!

To start simple and see if there's a way we could make X and O alternate turns! In order to do that we're going to need types which represent X and O!

Now we'd have types for each, but we get a conflict! We have duplicate definitions of X, O and N because of PieceT! Let's introduce our next GHC extension: {-# language DataKinds #-}! DataKinds takes a bit of fiddling with to understand, don't worry if you have a hard time understanding where the boundaries are. I still have to shake my head and think it through most of the time.

DataKinds let's you use constructors from any datatypes (defined with data or newtype) as types! To reference the 'type' version of a data constructor you prefix it with an apostrophe. Since we already defined PieceT, by enabling DataKinds we now have 'X, 'O, 'N in scope at the type level! Technically you can leave off the ' if it's clear to the compiler that you're referring to a type, but I like to be explicit about it for readability.

There's one more bonus that DataKinds gives us, it creates a new Kind for each family of constructors. Kinds are kind of like types for types, most Haskell types are of Kind *, and higher order kinds are * -> *, you can check it in ghci:

That last one is interesting! GHC notices that 'X isn't quite like other types, but that it was defined as part of the PieceT data group. This means that when we're writing functions on types we can actually specify what Kind of types we want to allow.

The first and easiest thing we could require of our game is that X and O always alternate turns. In order to that we'll need to store who's turn it is as part of the type of our board. Let's edit our Board type to have an additional parameter called t for turn, we don't actually have to have the type in our data-structure though, the compiler will do the check at compile-time so we won't need to store this info at the value level. A type which is used only on the left side of a data definition is called a "Phantom type". They're useful for specifying type constraints.

We'll also edit the signature of newBoard to show that X goes first; we don't need to change the definition at all though!

When we do this we'll get a compiler error that GHC was expecting a type, but we gave it something of Kind PieceT. GHC usually expects basic types of kind *, so if we do anything fancy we need to let it know what we're thinking. In this case we can add a type annotation to the Board type:

The KindSignatures pragma lets say what 'kind' we want all our types to be. This makes GHC happy, and helps us too by allowing us to specify that the 't' parameter should always be one of our pieces rather than some arbitrary type.

Unfortunately, changing the type of Board has broken our play function. We need to put something in as a 'turn' parameter there too. For now it's easiest to split it up into a playX and playY function which can specify their types more concretely.

Don't worry about the duplication, we'll clean that up later. Now you can only playX on a board when it's X's turn! Huzzah! If you try it the wrong way around GHC will complain:

Now the real fun starts! Let's see if we can ensure that people don't play on a space that's already been played!

A simple X or O in our type isn't going to cut it anymore, let's bulk up our representation of the board state. Let's keep track of each place someone has played! We can do this by writing a type level list of coordinates and piece types:

Remember that we're using DataKinds, so now BoardRep is a kind and Empty is a type and so is Cons when it's applied to two Coordinates, a Piece type and another BoardRep. It'll keep recursing until we hit an 'Empty.

Now every time we play a piece we'll also represent the change at the type level, in order to do that we need to be able to get the "type" of the coordinates of each move. This is a bit tricky, since the coordinate values themselves are all of the same type CoordT and NOTHING is a member of the types A, B, or C.

This is where we start to introduce some hacks to get things to work. Say hello to GADTs!

This is going to look weird and strangely verbose to most of you; it's unfortunate that we need to do things this way, maybe someday we'll find a better way. You can also look into using the Proxy type from Data.Proxy, but it suffers similar verbosity issues.

Let me explain how this works, we've written a new type Coord which has a constructor for each of our Coordinate values, but each constructur also sets the phantom type parameter of the Coord to the appropriate type-level version of the coordinate. We've also written a function coordVal which translates from our wrapper type into the matching CoordT value.

Bleh, a little ugly, but now we can write some well-typed play functions:

If ViewPatterns are new to you, check out Oliver Charles' post to learn more.

This is implemented as a linear search through the list looking for a match. If we ever find a matching set of coordinates in the list then we know we've played there already. Notice that type families also return a type, so we specify the Kind of that return value, in this case Bool, so the returned type will be either 'True or 'False.

Let's use this to write constraints for our play functions:

Now we're asserting that in order to call this function the board must not have played on those coordinates yet! If you haven't seen it before, ~ does an equality check on two types and creates a constraint which requires them to be equal.

We're close to done, but unfortunately in our upgrade we forgot to ensure that X and O always alternate!

Checking whose turn it is with our new representation is easier than you might think; if the last play was X then it's Os turn, and in all other cases it's Xs turn!

We also altered the constraints of playX and playO to reflect the requirement!

We're in good shape now! We can play a game!

Looks good to me! As an exercise try combining playX and playO into a more general play! Here's a hint, you'll want to make another wrapper type like we did with Coord!

Here's the finished product all at once, it's also available as a stack project in a git repo here.:

That last type there is a doozy! The type actually includes the entire game board, and it'll only grow as we add moves! This exposes some issues with using this approach for a real-life tic-tac-toe game. Not only are the types unwieldy if you ever need to specify them, but the type is actually so well defined that we can't really write a function to use user input!

Give it a try if you don't believe me, we'd want something along the lines of:

We'd parse the string into the coords for a move. It's really tough to decide what would go into the ? though, we can't give it a type because we don't know what the Coords will be until after we've already parsed the string! This is the sort of thing that's sometimes possible in Idris' dependent types, but is pretty tricky in Haskell. You can see Brian McKenna show how to build a type-safe printf in Idris if you're interested.

Thanks for joining me, let me know if you found anything confusing; hope you learned something!